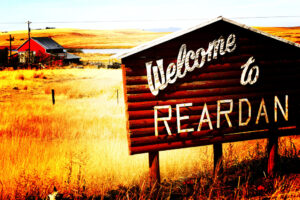 Celebration of Friends and Neighbors

The Reardan Community wide celebration known as “Reardan Mule Days” was founded by John W. Mann in 1904 and was originally a gathering of friends and neighbors and called Mule Day.

There is little history recorded about early Mule Day, but we can establish 1904 as the first year from the dates on two souvenir ribbons from 1908 and 1909 stating the years as the fourth and fifth Annual Mule Day. The 1909 ribbon is preserved in the Reardan Library and the 1908 ribbon belonged to Belle McClain who passed it on to grandson Gerald Brommer.

Mule Day continued and was eventually renamed “Community Day”. There is no record of when this occurred or when it was returned to Mule Day or when the “s” was added to day. Some say it was in the 70’s or 80’s but no one knows for sure.  The two names have been interchangeable ever since.  It has continued up to today as “Mule Days”.

Interruptions to our Celebration

Celebrated annually, there were two major world events that caused interruptions in the Mule Days Celebration.  The first was during World War II when a large number of local men served in the military.  The second lasted two years 2020 and 2021 during the COVID Pandemic and government mandates and recommendations advised no social gatherings.

Events in the early days are not much different than the modern version of celebration, rodeos, carnivals, concessions and dances were all part of the day.

Parades have been an important attraction to those wanting to attend.  Motor driven vehicles are modern day attractions while in the early days driving teams, single carts, mounted saddle horses and mules, pedigreed horses, bands, lodges, clubs and even registered cows were featured. Six or eight horse or mule hitch teams were common with an occasional 20 mule team featured from time to time.

Originally Mule Day was designed as a day of family events and fellowship, rather than a community fundraiser as it is now. Continually a celebration of community unity and fellowship, Mule Days as developed a dual goal. It is an important fundraiser for improvement, facilities and organizations within the town.  See Fundraisers provided over the years.  Completed Projects